Before we see the opening credits we are treated to a very big reveal. The Hound (Sandor Clegane) is back! It turns out he was only mostly dead and Ian McShane was his Miracle Max. 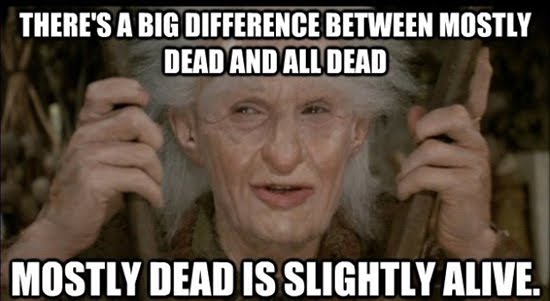 From the looks of things, The Hound now spends his days chopping wood that is used to build churches in the middle of nowhere. He appears to have chosen a peaceful life under McShane’s guidance. Speaking of whom,  McShane is great as the leader of this community and gets a fair bit of screen time in this episode. It looks like the show was just getting the most they could out of his performance because, sadly, he is found dead (along with the rest of his people) by the end of the episode. It turns out this whole mini plot line was just a set up for The Hound to go on a revenge driven killing spree. That sounds wonderful actually. Bring it on!

In King’s Landing we find out that Margaery has been playing possum with the High Sparrow (and in the marriage bed apparently). She is doing what she has to do to survive and makes it clear to her grandmother, Lady Olenna, that it would be in her best interests to leave the city and go back to Highgarden. She obliges, but not before earning her title as the “Queen of Thorns” by giving Cersei a piece of her mind. As much fun as it is to watch Diana Rigg verbally abuse someone, it doesn’t seem to amuse Cersei at all. The Queen of Thorns may be in danger of getting pricked herself.

Bronn also makes his return in this episode and joins Jaime on his siege of Riverrun. The Freys aren’t doing such a great job and the Blackfish (Brynden Tully) isn’t buying their threats. Jaime and Bronn quickly take over the operation and Jaime attempts a parlay with the Blackfish. Looks like there will be no truce and we’ll all have to wait two years for the Riverrun army to use up all of its supplies. All in all these scenes were a lot of set up, but it looks like it’s going to get rowdy in the Riverlands soon. Fingers crossed.

Jon, Sansa, and Davos go on a couple of recruiting trips. They get the Wildlings on their side with Tormund’s help (and I’m sure nobody wants to argue with Wun Wun) and they head to Bear Island. The Lady of House Mormont is about ten years old, but don’t tell her that. It was a fun scene that ended in the Starks retaining their allies and gaining a whopping 62 soldiers. It didn’t go so well at House Glover as they were not so easily reminded of their loyalty to the King of the North. Eventually Sansa gets frustrated and sends out a raven. Hopefully with a letter asking for more help. Hopefully soon. Littlefingers crossed.

Arya narrowly escapes an assassination attempt before she can leave Bravos. She’s still alive, but definitely not well. The way that Faceless girl was smirking made me want to rip her face off…well, her real face that is…

That’s it for this week. Let me know your thoughts and theories in the comments and, as always, thank you for reading! Looks like next week’s sneak peek (below) has The Hound going all Paul Bunyan on some people while the Mountain gets let loose! We need to bring these two brothers back together again. I’m sure The Hound has an “axe” to grind with his older brother! Get it! Ok…I’ll stop.