Battle of the Bastards

Throughout the seasons of Game of Thrones the 9th episodes have been famous for standing out among the crowd. Think back to “Baelor” or “Blackwater” or the infamous Red Wedding episode,”The Rains of Castamere.” The penultimate episode of season 6 does not stray from that trend in the least bit. In fact, I have to say that it is easily one of my favorite episodes ever in the series. I might be jumping the gun here because the season finale is set up to be a fantastic ending to arguably the best season yet. However, it’s not a stretch at all to say that “Battle of the Bastards” was epic. What makes the episode even more amazing (and somewhat ironic) to me is that it starts in a place that I really haven’t loved that much this season, Meereen. We’ve been waiting a very long time for something…anything to happen there and the show delivered exactly what we’ve been hoping to see since the end of the first season when Dany’s dragons are born. Are you ready?

OK. I did not expect to see any location featured in this episode aside from Winterfell, but oh my Lord of Light I am so happy with what we saw in Meereen! The show has slowly adapted its audience to the elements of high fantasy (Dragons, Direwolves, White Walkers, Magic, etc.)  throughout the seasons and now they can create beautiful scenes like these. Granted, they probably used up their entire special effects budget on this one episode, but I don’t care! Dragons! (We’ve previously established my love for dragons.) Dany soaring into Meereen on the back of Drogon made me stand up and cheer! It reminded me of the first time I read “The Hobbit” or “The Lord of the Rings.” It took me back to having movie nights as a kid and watching “Willow” for the first time. Was it a VHS rental from Blockbuster Video you ask? I don’t know, was Madmartigan the greatest swordsman who ever lived? (Ah yes, nerd sarcasm.) Where was I? It doesn’t matter. I could watch the first ten minutes of this episode over and over and enjoy the hell out of it every single time. Dany’s three dragons attacking the Slave Masters’ armada, Grey Worm busting out some Unsullied ninja skills, Tyrion speaking like a boss and dropping the mic, all of it. In a word… “Dracarys.”

After all of that we get the first meeting between Jon and Ramsay. They discuss terms of surrender and battle, neither of which are agreed upon. Lord Bolton somehow makes us hate him even more, but not before Sansa looks him in the eye and tells him that he better sleep well considering he will die tomorrow. Badass. Then she gives Jon some advice on how to deal with Ramsay. It doesn’t go over so well with Jon, but as we find out later on, she was all too right. Melisandre gives Lord Snow some advice as well. Hers is much more simple. “Don’t die.” (Been there, done that.) Davos and Tormund discuss their own traditions the night before a battle and while Tormund sets off to indulge in some vintage sour goat’s milk, Davos does some detective work and finds a justifiable reason to kill the Red Woman.

Thank you show runners for “yada yada-ing” through the whole arrival of the Greyjoys at Meereen. We got a short scene that showed Dany and Yara forming an alliance while Tyrion chided Theon for making midget jokes back in the day. When Tyrion finds out about Theon’s “predicament,” I wonder if he’ll throw as many jokes at him as he did to Varys. Seriously, where did that eunuch run off to anyway? The scene was good and it served its purpose as a nice intermission before the main event.

Poor Rickon. Whenever Ramsay says he wants to play a “game” it’s never good. We knew the youngest of the Stark siblings wasn’t long for this world, but it was still a tragic end for this character. In any event, Ramsay’s ploy works and he lures Jon out just far enough to be in the range of his archers. Our hero bravely (or foolishly) charges in as his army follows. The best shot of the episode, and maybe the series, follows as Jon unsheathes Longclaw and faces down a charging cavalry. 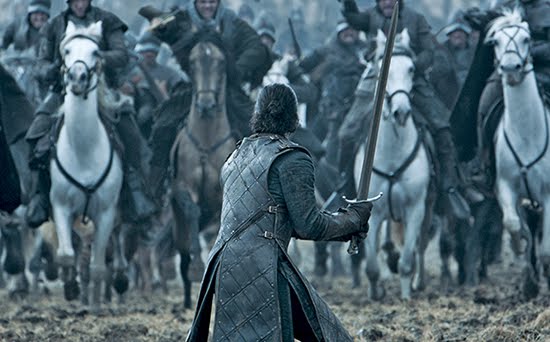 The best sequence of the episode, and maybe the series, follows immediately after as the armies collide and the battle begins. The camera follows Jon through a series of swordplay and near misses as the bodies literally pile up on both sides. (By the way, did anybody else see Wun Wun charge into a headless horseman. Watch it again. Fantastic.) Anyway, as it turns out Ramsay must have just watched “300” considering his army of Spartans builds a wall of shields and spears to surround Jon’s forces. Things begin to look grim for Jon as he is almost killed by his own men. (Again. Been there, done that.) As many had predicted, the letter Sansa wrote two episodes ago was to Littlefinger, and the army of The Vale shows up in the knick of time to play a deadly game of dominos with the Boltons. Ramsay tucks his tail and runs as Jon, Tormund, and Wun Wun give chase. The walls of Winterfell may have never been breached, but the wooden door at the main gateway is no match for a giant. If Hodor had been there it would have been a different story… Too soon? Wun Wun gives his life to break down the door and Jon comes face to face with Ramsay for their second (and final) meeting.

This time Ramsay accepts Jon’s one on one challenge and before he can say “Ned’s your uncle,” (Come on. It is known.) Jon Snow…well…he Jon Snaps. As he relentlessly beats Lord Bolton’s face in the only thing that causes him to hesitate is Sansa. Jon realizes that it is not his life to take and leaves the battered Bolton unconscious in the snow. Ramsay awakens bound to a chair in the dog kennel. Sansa reads him his last rites and vows that everything about him will disappear. In a twisted act of poetic justice, Ramsay’s starving hounds chow down on an “all you can eat Bolton buffet” as Sansa walks away leaving us to wonder if that smirk on her face will ever fade. Considering what she’s been through, I don’t believe it ever should.

That’s all for now kids! As always, thank you for reading and let me know your thoughts and theories below. The trailer for the season finale is below and it shows us some potentially great things happening in almost every plot line this year. One line that I am excited and nervous about is “The Freys and the Lannisters send their regards.” Nothing good ever comes after those words.The Kingslayer might need to watch his back…